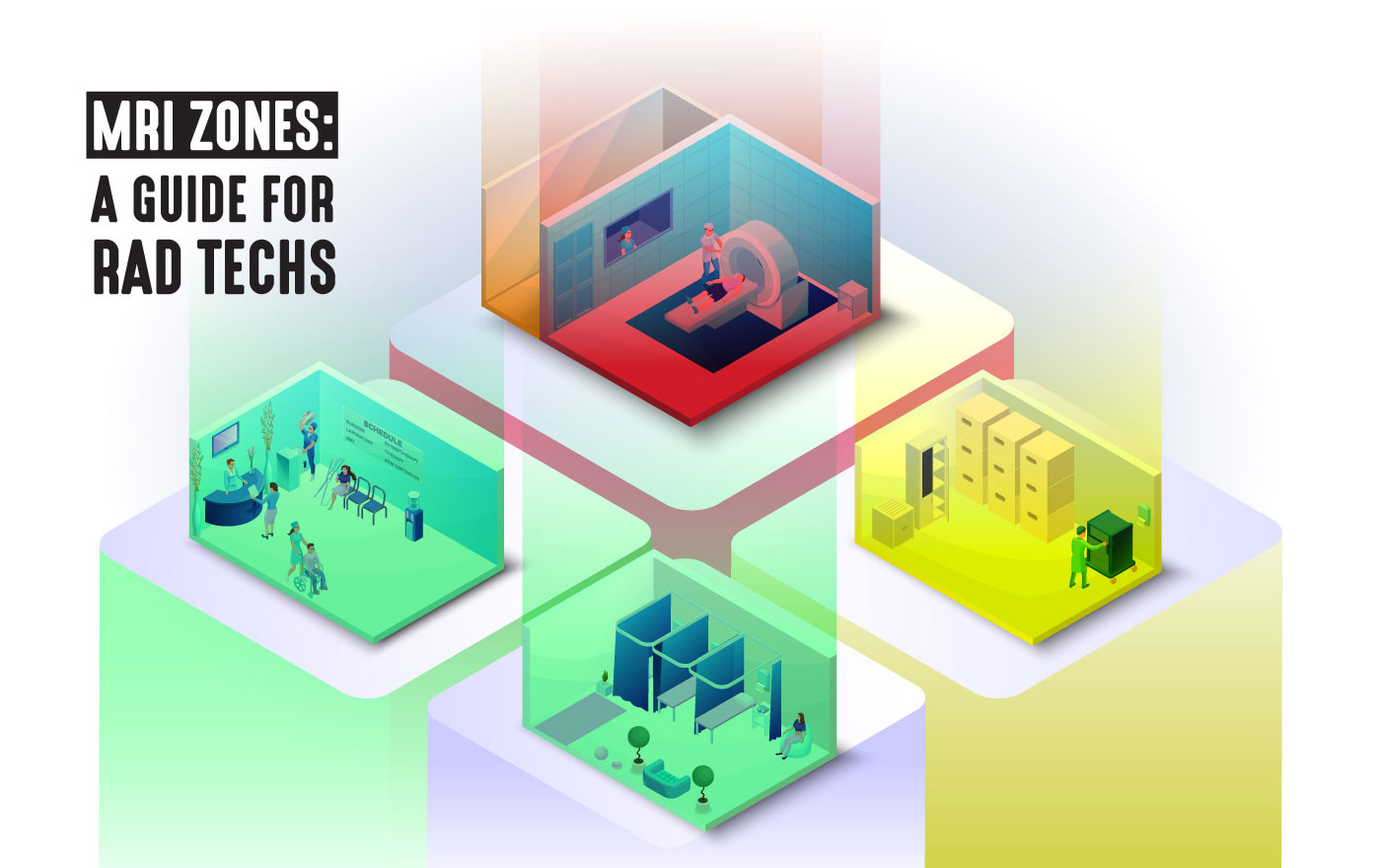 Facebook0Linkedin0Twitter0Email0
X
MRI accidents happen all the time. Most of them are due to zone infractions, whether it be a person or an object that entered a restricted zone. It is a shared responsibility among the staff members of the facility to be conscientious of MRI safety regulations and to prevent these kinds of accidents. This article is intended as a brief reference guide for MRI technologists to the MRI safety zones defined by the American College of Radiology (ACR). It provides a definition of each MRI safety zone, diagrams of what each zone might look like, and the screening process for each zone.

We cannot assume that patients or their loved ones know much, if anything, about MRI safety. Most simply do not have the experience or background knowledge they would need to understand the risks and hazards posed by the MR equipment. Not to mention that their minds are very likely on other things: their own health, or the health of a family member or friend coming for an examination. They do not know that the MRI magnet is always on, or that it pulls with a force somewhere between 30,000 and 60,000 times that of Earth’s gravity.

Imagine a patient who is nervous about having the MRI and wants her husband to be nearby while she gets on the table. He tells her that he will wait by the door, but while the technologist is helping the patient on the table, the husband gets nervous and comes running in the room without thinking. He was never screened, and he has a pacemaker. This is a huge liability.

Or imagine a sales person for one of the vendors comes to your department. The receptionist tells him to come on back. She recognizes him and thinks it’s ok. The salesperson looks for you and notices you in the scan room. He comes into the room to talk to you, and his clipboard, tie tack, and a pen fly across the room towards the scanner where you are standing, striking you in the head with the force of 500 psi. This, unfortunately, is a real possibility.

MRI zones are one of the most common standardized methods used in MRI, and they are probably the most effective at controlling and preventing the majority of risks associated with MRI. MRI zones are set up in each facility as a result of risk management planning processes. As an MRI technologist, it is important to be aware of the diagram and clearance process for each of the zones.

The American College of Radiology has defined four safety zones within MRI facilities, numbered I-IV. The zones correspond to the increasing exposure to the magnetic field, and, therefore, the increasing potential safety risks. Below are definitions and diagrams of each of the zones. In order to ensure precision and consistency of understanding, the definitions for each of the zones are reproduced from the 2020 ACR Manual on MR Safety, accessible here.

A quick note on the diagrams: the exact location of each MRI zone will vary greatly from facility to facility and will also depend on what common areas are shared with other modalities. The diagrams presented below are intended as basic example diagrams.

ACR Definition: This region includes all areas that are freely accessible to the general public. This area is typically outside the MR environment itself and is the area through which patients, health care personnel, and other employees of the MR facility access the MR environment.

A waiting room shared with other departments would be an example of Zone I. There is no screening required and anyone can be in this zone. 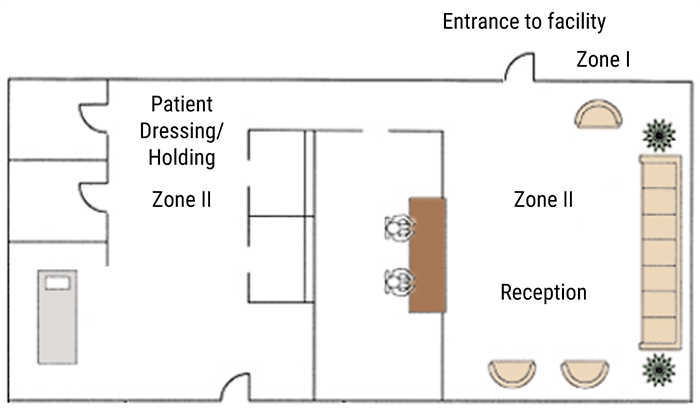 ACR Definition: This area is the interface between the publicly accessible, uncontrolled Zone I and the strictly controlled areas of Zones III and IV. Typically, patients are greeted in Zone II and are permitted to move freely throughout Zone II, under the supervision of MR Personnel, prior to entry into Zone III. It is recommended that patient preparation for the MRI examination take place in Zone II. This preparation includes MRI screening, medical history, and appropriate patient gowning.

In other words, MRI Zone II provides an intermediary space or buffer between Zone I and the more strictly controlled MRI zones (III and IV). MR safety screening is typically done in Zone II. No one should not be allowed to enter this zone without being accompanied by MR department personnel. After being screened, loved ones accompanying patients are permitted to come along to help with the screening and dressing process, so long as they are accompanied by MR personnel. 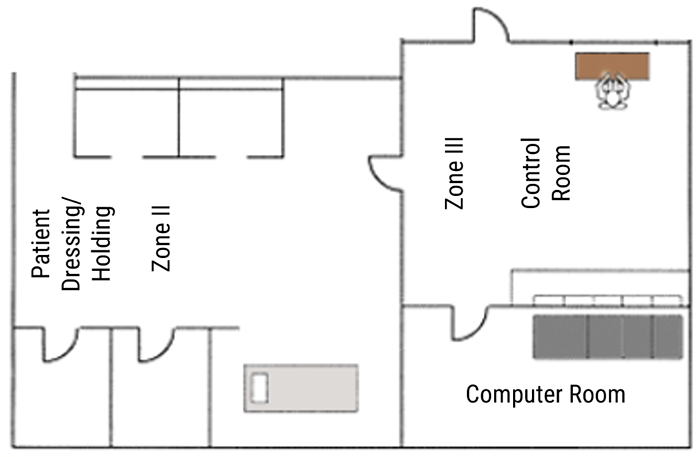 ACR Definition: This area is synonymous with the MR scanner room itself (ie, the physical confines of the room where the scanner is located). Zone IV, by definition, will always be located within Zone III, as it is the MR magnet and its cryostat that generate the existence of Zone III. Zone IV should also be clearly labeled as being potentially hazardous because of the presence of very strong magnetic fields. As part of the Zone IV site restriction, all MR installations should provide for visual observation by Level 2 MR Personnel to access pathways into Zone IV. By means of illustration only, the MR technologists would be able to directly observe and control, via line of sight or via video monitors, the entrances or access corridors to Zone IV from their normal positions when stationed at their desks in the scan control room. Importantly, controlled site-access restriction to Zones III and IV must be maintained during resuscitation and other emergent situations for the protection of all involved. (For the full description of MRI Zone IV, see the ACR Manual here, page 25.)

Below is a brief summation of the screening and clearance required for each MRI zone. 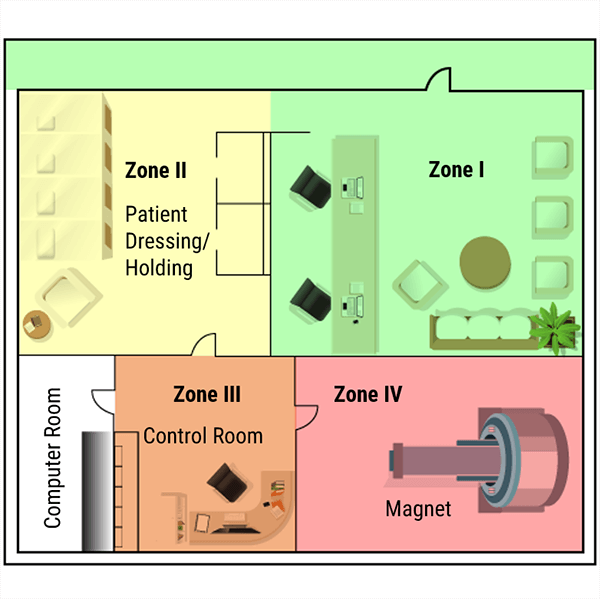 Zone I requires no screening. This is an area open to the general public. While most MRI patients in Zone I have undergone a phone screening, it is not required.

Zone II is where screening will take place. Patients receiving an MRI may have already been given the screening form in Zone I. This form is reviewed and confirmed verbally in Zone II.

Zone IV: Only people cleared to enter Zone IV are permitted entry. Clearance is the final step in the screening process.

The importance of knowing and adhering to the procedures for the four MRI zones cannot be overstated. It is, perhaps, the simplest and most effective way to ensure the safety of patients, their loved ones, and MR personnel. Remember, “the magnet is always on,” and so your awareness of and attention to MRI zone safety must be, as well.