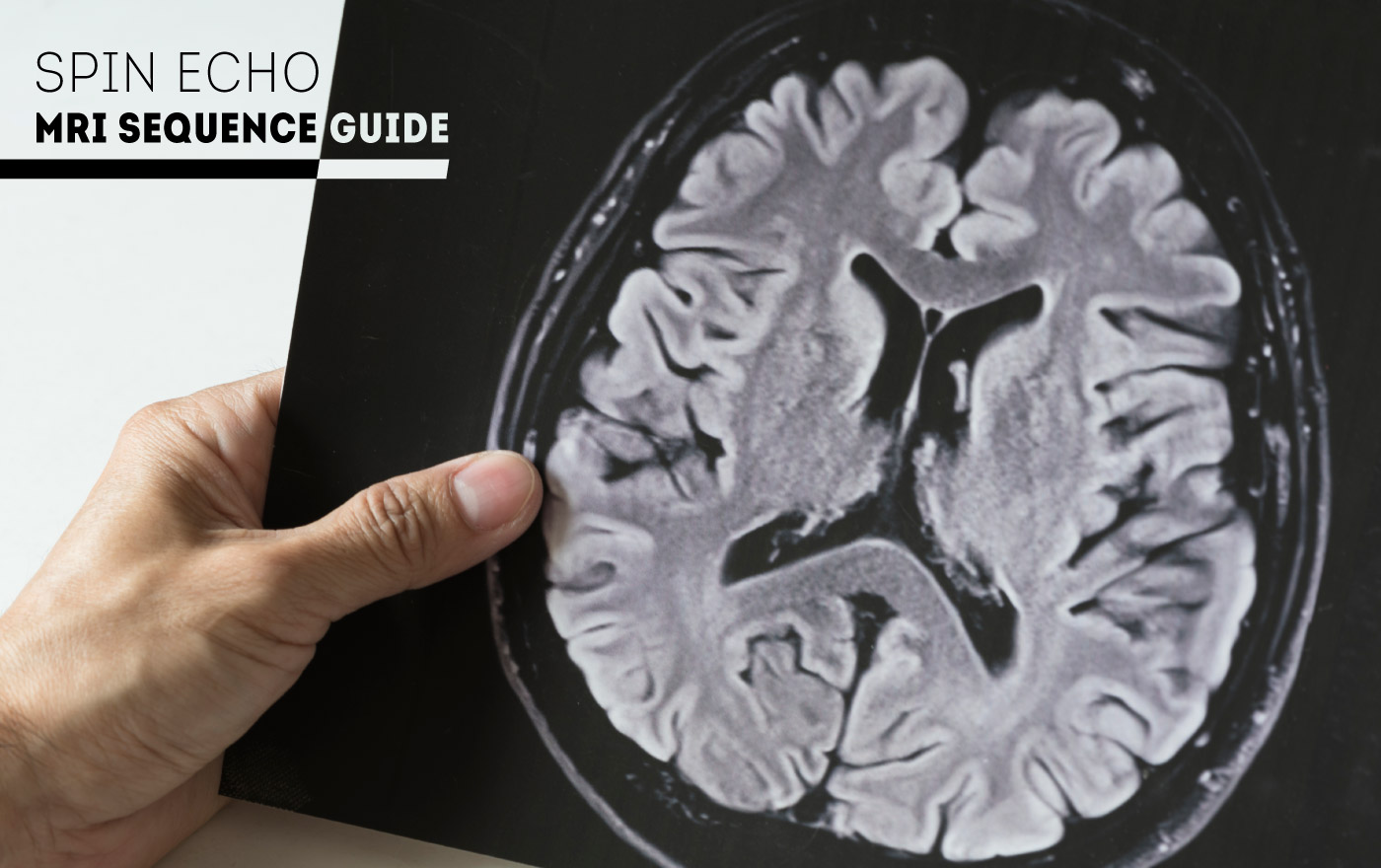 This is the first in our series of guides for radiologic technologists on MRI sequences. In MRI, a sequence is a combination of radiofrequency waves and gradient pulses which are both applied at very specific times and in a specific chronological order to produce a collected signal which is used to fill the Fourier space and create an image. There are many different sequences used in MRI, each one having unique advantages, disadvantages, and parameters. We have chosen to start our series of guides with the most basic of all MRI sequences, the spin echo (SE) sequence, as it is the foundation of many others.

The guide below will address the specific characteristics of the spin echo chronogram, the parameters used with the spin echo sequence, its advantages and limitations, as well as when this sequence should be used in an MRI examination.

The spin echo is the basic sequence used in MRI, even though it is being progressively replaced by the fast spin echo sequences (TSE/FSE).

The spin echo is characterized by an initial 90° pulse. At half the interval after which the signal is read (TE/2), a 180° pulse is applied to compensate dephasings due to local magnetic field inhomogeneities.

In this time diagram of the spin echo sequence, we can see the shape of slice selection gradients that are bipolar for the 90° pulse in order to compensate dephasings and are non-bipolar at the moment the 180° pulse is applied due to the inversion of dephasings caused by this pulse.

Using the left-hand scroll bar will enable you to see movements inside the Fourier space during the sequence. This way, you can verify that only one row of the k-space is filled at each TR.

There must be as many TRs as there are rows to fill (which is achieved by incrementing the phase gradient each time). This is why the spin echo sequence is fairly long.

The parameters that are most important in determining the contrast and weighting of the MRI sequence are TR and TE.

Other parameters affect the signal-to-noise ratio and/or the spatial resolution, such as bandwidth (when it’s accessible), the phase matrix, the frequency matrix, FOV, and slice thickness.

Advantages and Disadvantages of Spin Echo

There are many advantages to the spin echo sequence:

And as we mentioned briefly before, the major drawback of this MRI sequence is that it may be long because only one row of the Fourier space is filled at each TR. This is particularly true when we carry out a T2 or proton density weighting during which long TRs are used.

This sequence is used:

A fast spin echo sequence is in fact by definition less T1 weighted because it is involved in later echo images.

Below are several examples of images obtained with a true spin echo sequence. These are all T1 pulse sequences, as is common with the spin echo.

Remember that specific tissue has a specific appearance due to its T1 time: fluid will be dark and fat will be bright.

This guide was intended to support you in mastering the fundamentals of the spin echo MRI sequence, the most basic MRI sequence and the foundation for many, more advanced sequences. Check out the next guide in our MRI sequences series, Fast Spin Echo, or, for more in depth information, register for one of our interactive MRI courses below.